Helium is a new crypto-economic protocol that underpins a new business model deploying and managing wireless networks at about 100x lower cost than traditional top-down telecom business models. The first wireless technology supported by Helium is LoRaWAN, a popular technology for IoT devices. Multicoin Capital co-led the Series C round in Helium Inc in 2019 along with USV.

We invested in Helium before the network launched. Now there are over 22,800 hotspots deployed across the world, and growth is accelerating. The network’s growth has been primarily bottlenecked by hardware production. The Helium community recently approved new hardware manufacturers who will ship tens of thousands of hotspots within the next several months.

The growth of the Helium Network is driven by a positive feedback loop or flywheel. Let's explore some numbers. There are currently approximately 22,800 hotspots on the network, meaning that the average hotspot earns 145 HNT per month, or 4.82 HNT per day. There is an ecosystem of hotspot manufacturers, and hotspots are available for as little as $350. Mining rates vary significantly between different hotspots based on location and quality of coverage. On average, at the current $6.92 market price for HNT, a new hotspot pays for itself in about 10 days, as shown below. 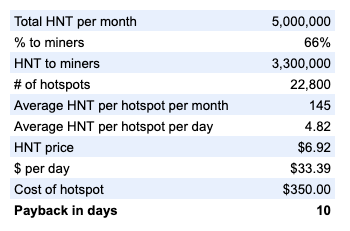 Mining HNT gets more difficult as more hotspots join the network. When we started mining Helium in Austin in August 2019, hotspots could regularly mine 100 HNT per day! So how much will the average hotspot mine in the future? Let’s do the math.

Following the passage of HIP-19 in late January, new third-party manufacturers have begun offering differentiated hardware that can serve the Helium Network. Since then, these manufacturers have fielded enormous inbound demand. This means that over the next 90 days the Helium network is going to grow significantly.

In short order, the network will have at least 30,000 hotspots. Assuming that the network growth does not increase HNT price, this would mean a new hotspot will pay for itself in about 14 days on average. 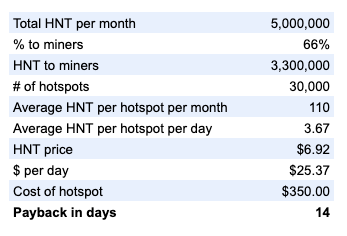 This average payback period is very attractive, and that is why the network is growing so fast. Moreover, hotspots costs are falling. The first hotspots we purchased in 2019 were $500. Today new hotspots cost $350. Based on conversations with 3rd party manufacturers, we expect that hotspots will be $150 within a year.

What if we assume the network grows to 100,000 hotspots in 2021? Then the average hotspot would earn 1.1 HNT per day. Assuming a flat HNT price, a new hotspot would pay for itself in about 6 weeks. 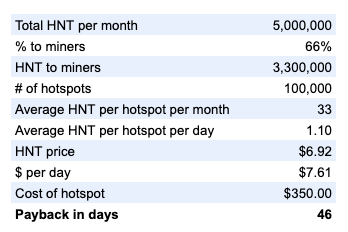 Let’s stop to visualize what this network growth means. Right now the coverage map looks like this: 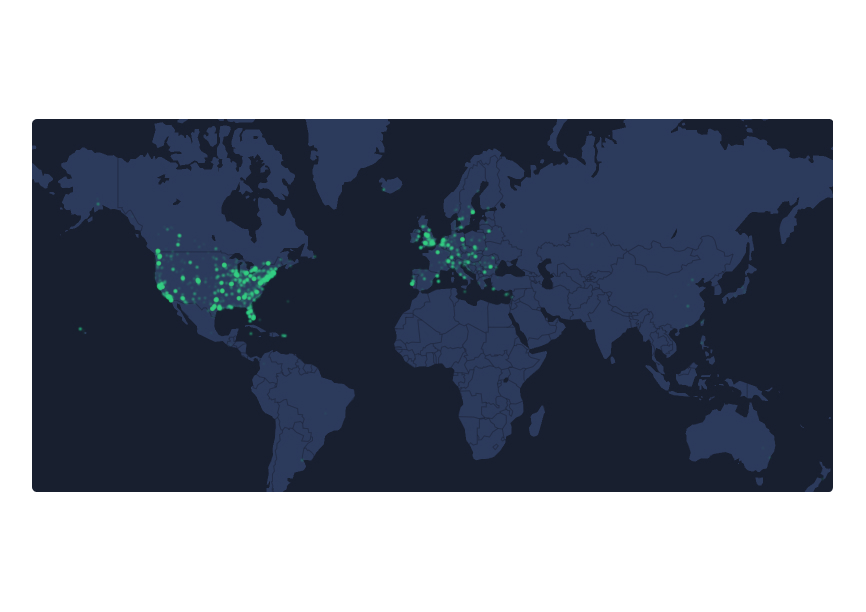 This network growth would mean the map at the end of 2021 probably look something like this: 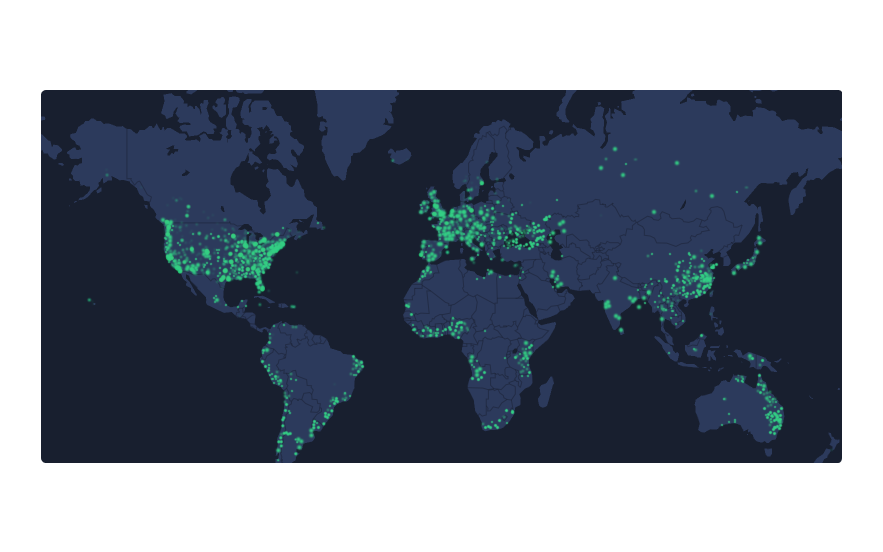 We believe it is reasonable to assume the HNT price will be higher in the world of the second map as the Helium Network gains more awareness and becomes more useful. This higher price will mean better ROI for Helium hotspot owners, which will further drive network growth. If we assume the price of HNT doubles while the network grows to 100,000 hotspots, the payback period for a new hotspot becomes just 23 days. 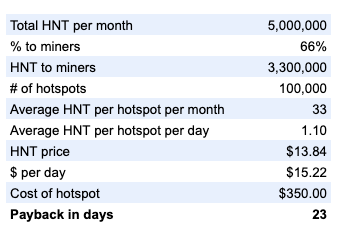 Network growth means more economies of scale for hotspot manufacturers, which drives lower costs for hotspots. We believe it’s reasonable to estimate that the lower bound for hotspot costs is about $50, which would bring the payback down to 3 days even with 100,000 hotspots already on the network. 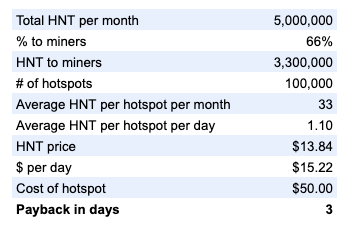 And so this is the economic flywheel that fuels the growth of the Helium Network: 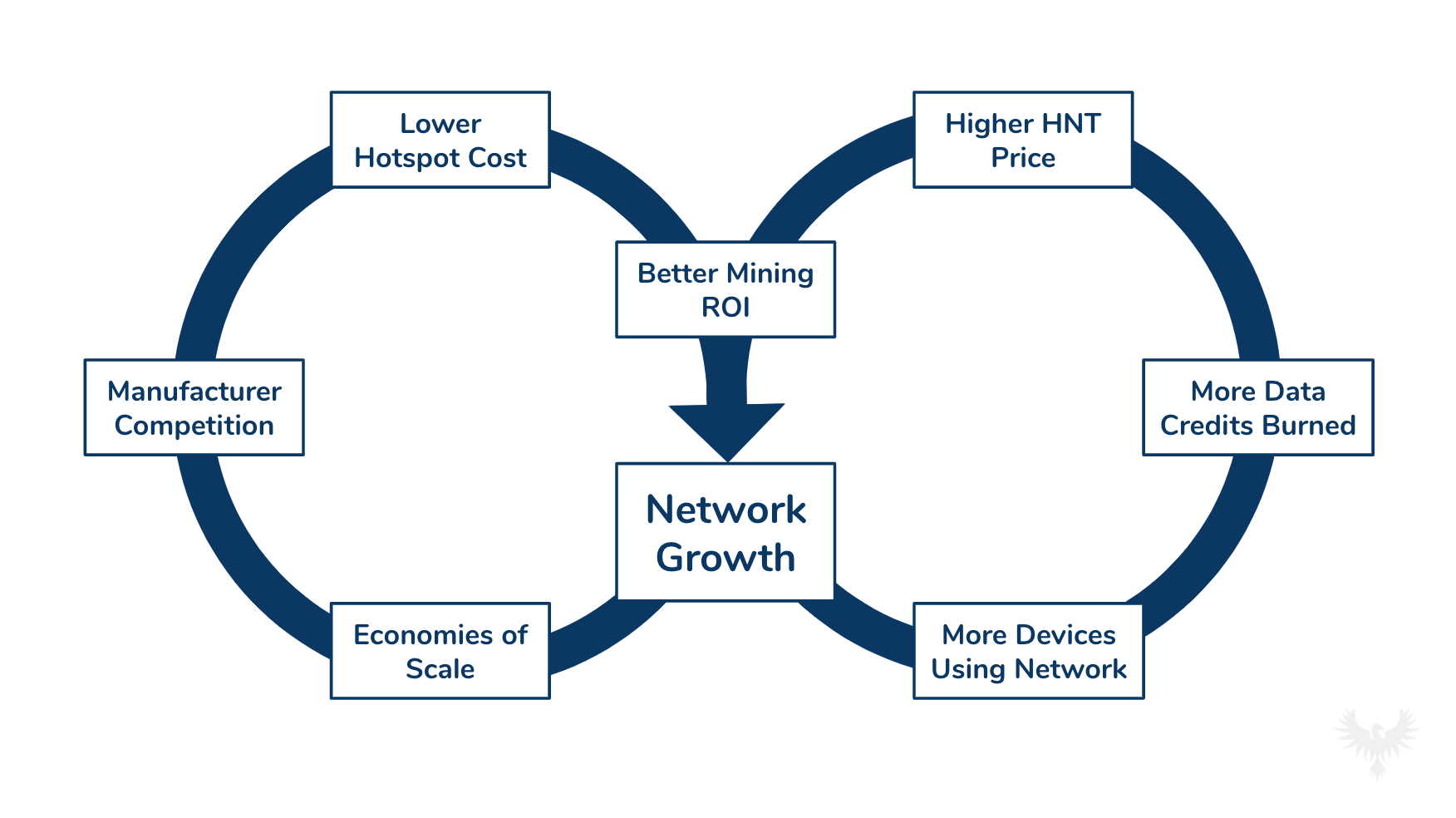 Given the range of use cases for Helium (dog tag trackers, IoT sensors, tile-like trackers, even better mouse traps, etc.), it’s no surprise that IoT companies have tried to deploy a network like this many times over the last decade. However, the business model of deploying these networks has always been the Achilles Heel. There are enough deployments that people have even formally studied them across vendors to understand what works and what doesn’t.

The principal breakthrough for Helium is the crypto-economic flywheel described in this essay. This flywheel has successfully subsidized costs for early miners who helped build out the network in the early days. This subsidization has been proven to be effective, as a substantial percentage of the United States and Western Europe is now covered by the Helium Network. Over the next year, the Helium network will roll out across the rest of the world.

The Helium protocol will also expand to include new wireless technologies like 5G. Powered by the economic flywheel, the Helium network will grow to dominate global telecommunications.

Disclosure: Multicoin has established, maintains and enforces written policies and procedures reasonably designed to identify and effectively manage conflicts of interest related to its investment activities. Multicoin Capital abides by a “No Trade Policy” for the assets listed in this report for 3 days (“No Trade Period”) following its public release. Multicoin Capital is an investor in Helium, Inc. and owns HNT.