Bitcoin is Better than Digital Gold

A common phrase used to explain Bitcoin is “Bitcoin is digital gold.” This statement implies a few things:

Let’s consider the risks and benefits of Bitcoin in a scenario in which a government becomes unstable and politicians begin inflating their currency to stay in power.

You’ll have a tough time physically dividing gold to transact with it. Gold can’t easily be used to make small-scale purchases.

If you don’t store gold under your mattress, but instead hold a claim or IOU against some gold in a vault somewhere, you have to pay storage costs and you have intrinsic counterparty risk – what if the vault is breached, etc. But more importantly, you risk that the vault may not honor your IOU. In the wake of government-uncertainty, your access may be restricted or delayed indefinitely at exactly the time when you most need access to your fiat hedge.

The worse the situation, the more likely you’ll need access to your gold, and the more likely it is that you won’t be able to redeem or sell your IOU. Even if you could sell the IOU, what would you sell it for, your inflating fiat currency?

Let’s contrast this with Bitcoin:

In the US, the risk of hyperinflation is low. But in many countries abroad, this is not the case. Consider the ~250M people who live in Venezuela, Argentina, South Sudan, Syria, Turkey, South Korea, and North Korea today representing about $3,200B of GDP. For these individuals, fear of hyperinflation and government collapse is real. 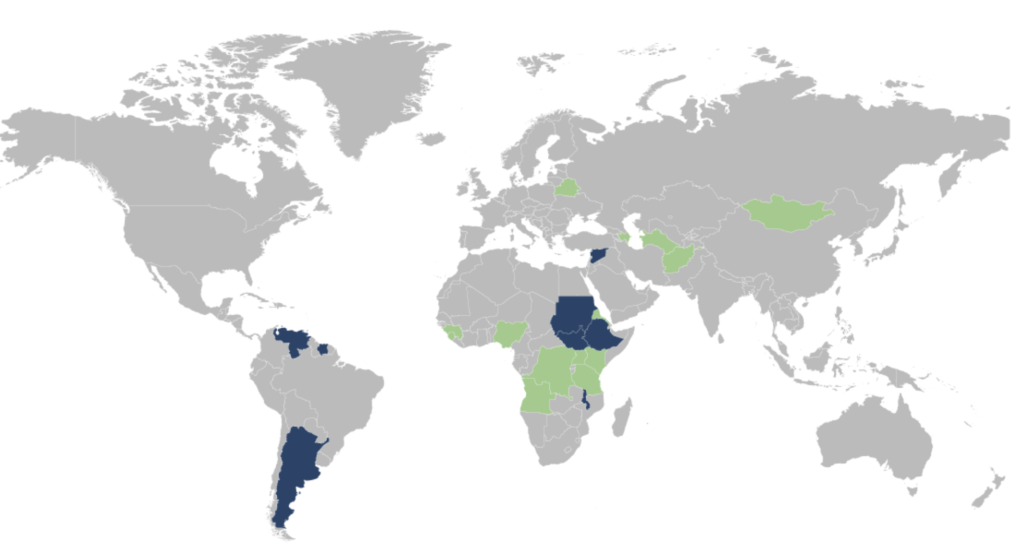 Countries in blue are those in which inflation > 20%.

Countries in green are those with inflation > 10%.

In time, we expect the price of gold to fall as people transfer wealth from gold to Bitcoin. Gold won’t go to $0 as it has functional value (jewelry, computer chips) that Bitcoin will never replace. Bitcoin won’t entirely replace gold, but it will largely replace gold as a fiat hedge.

There are a few counter arguments to this thesis:

Gold has a longer history, implying greater long term stability. Gold is easier to understand. You can see and feel gold. Bitcoin is purely abstract. You cannot see or feel it. What if there’s a catastrophic bug in Bitcoin or encryption is broken? The price of gold is not as volatile as Bitcoin making it a more stable store of value. Let’s address each of these.

There really isn’t a good answer to #1. If you believe in the inertia of the past, then you are not going to believe that Bitcoin can replace gold as a fiat hedge. You may believe in the old self-fulfilling prophecy of the value derived from gold, but not the new self-fulfilling prophecy of the value derived from Bitcoin. But humanity has shown a remarkable ability to adopt new strange practices rather quickly:

Uber – getting in a stranger’s car

Arguing that people won’t adopt better solutions because existing solutions have been around longer has generally been a losing argument over the arc of history. Inferior technologies may not die immediately, but the gravity of inferiority is insurmountable. Opinions may not shift as fast as some would like, but they shift.

Number 2 is true today, but has a pretty short half-life. Few people understood the Internet in 1995.

Number 3 is possible, but highly unlikely. The network value of Bitcoin today is on the order of $60-70B. If there was a truly catastrophic exploit to be found, it probably would have been found and exploited.

We may still find serious bugs – the OpenSSL heartbleed bug from a few years ago comes to mind as an analogous example – but even these kinds of bugs are likely to be fixed by the network before catastrophic damage is incurred. Once heartbleed was discovered, the tech community rallied and all of the most important power centers on the Internet upgraded to a new version of OpenSSL that fixed the problem. We’ve already seen similar behavior in the Bitcoin network when bugs were discovered in 2011 – 2014.

Number 4 is true today, but unlikely to be so in the future. Bitcoin today is worth about 1% of all the gold in the world. As the total value of Bitcoin increases, volatility will decrease because of limits of absolute amounts of capital flows. When Bitcoin is worth $1T, $10B capital flows will move the market far less than a $10B capital flow would relative to current network value of $60-70B.

The arguments against Bitcoin and for gold are generally pretty weak and rely on lack of change, a static view of the world, and unlikely events. On the other hand, the arguments for Bitcoin and against gold (storage, transport, hide-ability, divisibility) are indisputable.

Bitcoin is better than digital gold.