Our Investment in The Graph

I’m proud to announce that Multicoin has led a $2.5M seed round in The Graph. We believe that The Graph is going to be one of the most important protocols in the Web3 stack. But before jumping into the vision, allow me to provide some history.

Yaniv first reached out to me in February of 2018. He reached out cold via direct message (DM) on Twitter. This is precisely why I keep my DMs open. 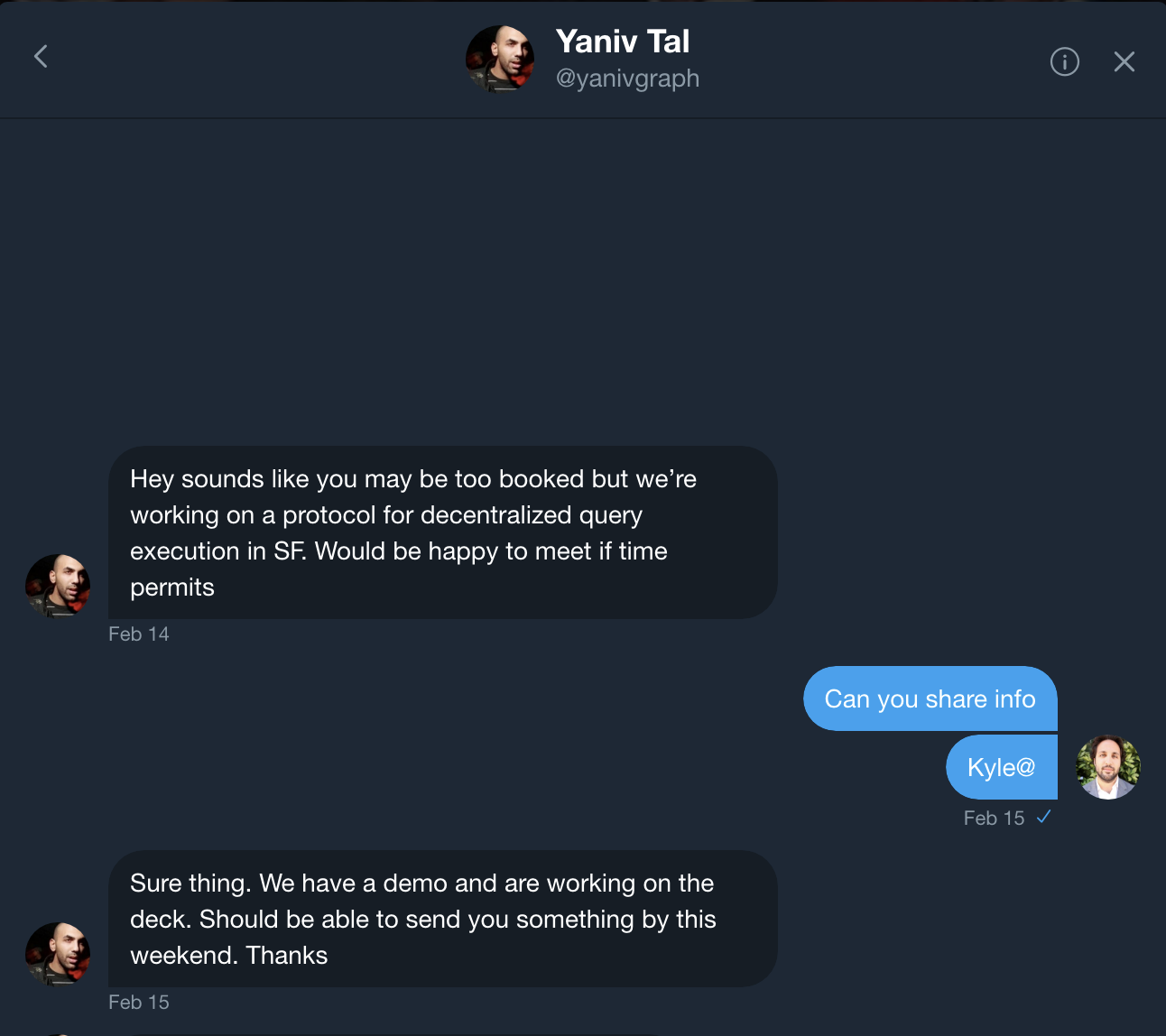 First contact with Yaniv and the The Graph, February, 2018 Yaniv shared a concise 7-page deck. The deck eloquently described the key technical problem that The Graph is solving—that querying data out of the blockchain is both difficult, and re-introduces a layer of centralization—and explained how The Graph solved the problem.

During our first call, Yaniv showed me a few demos, including a compelling demo in which The Graph—via GraphQL subscriptions (basically a pub/sub on the Ethereum blockchain)—pushed live updates to the browser after submitting a transaction to the Ethereum chain via Metamask on another computer. I was immediately impressed with the elegance and the speed. As Yaniv expanded on that demo, it quickly became clear how important The Graph would be for every app building on the Web3 stack. I flew to San Francisco shortly thereafter to connect with Yaniv and his cofounder Brandon in person, and we committed to leading The Graph’s seed round shortly thereafter.

Since then, cofounders Yaniv, Brandon, Jannis, and the rest of the Graph team have been heads down, building (and shipping, if you just attended Graph Day!) world class open source software!

In the year since we first met, virtually everyone in the web3 development community has come to recognize how important and underserved this layer of the web3 stack really is. The Graph has emerged as the market leader, with dozens of teams using the service in closed beta right now.

I’ve had a chance to work with The Graph team for almost a year now, and they’ve been nothing short of exceptional.

First, they’re excellent communicators. In a market full of technologists who love to geek out about consensus algorithms, the value of the ability to clearly communicate cannot be overstated. This has been clear from the first deck Yaniv sent me, and continues to show in all of the Graph’s communications, both technical and non-technical.

They’ve done a superb job executing: building product, hiring, facilitating and interacting with the community, and more. Engineers, especially those in the crypto space, are notoriously poor at forecasting timelines. In our first call, Yaniv said they were going to roll out a limited beta service over Summer, and they did just that. I’d also like to highlight Graph Day, which they just hosted. Per community reception, it was one of the best technical events of the last year.

The last thing I’ll note is that they’re incredibly humble, they really believe in the power of web3 and what they’re building, and they’re focused on building something durable.

Addressing Bottlenecks In The Web3 Stack

We’ve been spending a lot of time thinking about where value is going to accrue in the Web3 Stack, and we’ve come to the conclusion that the query layer is going to capture a lot.

The Graph solves this problem by exposing both Ethereum and IPFS (and other data sources over time) to developers using a distributed, redundant, permissionless network via a GraphQL endpoint. Why GraphQL? Because it provides an elegant query interface—so much so that many web2 companies are transitioning away from REST to GraphQL—and because it’s extremely flexible. Given the breadth of data stored across Ethereum, IPFS, and other chains, this level of flexibility is essential.

So, how big is this problem? Although the Ethereum network is logging under 1M transactions per day, developers are querying Infura, a centralized key:value lookup service (Infura does not provide indexing and query services) over 10B times per day. As web3 adoption grows and consumers generate millions and eventually billions of web3 transactions every day, usage of The Graph will exponentially increase.

As part of a decentralized network, why would anyone voluntarily host a Graph node? The short answer is: because they can be paid for doing so. The Graph will adopt a work token model, among some other mechanics to allow developers to parameterize the data they’d like The Graph to index.

The Graph team just hosted Graph Day, and they’re launching the 1.0 version of their service in the next few weeks. Later this year, they’ll launch a decentralized network, allowing developers to choose the right trust model for their applications.

We couldn’t be more excited to support The Graph, and are looking forward to seeing all of the amazing applications that developers build on it.

The problems that The Graph is solving are immense and foundational to the future of web3. If you’d like to help make that happen, The Graph is hiring.