A New Model for Token Distribution

Crypto networks are supposed to be decentralized. As Balaji Srinivasan, CTO of Coinbase, has written, decentralization can be measured in a number of dimensions.

Of the major cryptocurrencies, Bitcoin has the lowest Gini coefficient. This is at least partially due to age, because early holders slowly sell over time. However, a more important consideration driving concentration of wealth is that Bitcoin is mined using proof-of-work (PoW). In PoW, miners incur fiat-denominated costs, and so they must sell at least some of their mining rewards to keep the lights on.

Relative to blockchains that launch using PoS consensus, PoW chains ultimately produce economies with a lower Gini coefficient because miners are forced to sell at least some of their coins. This critique is true not only of PoS chains, but of all layer-2 tokens built on top of smart contract platforms.

This problem is more pervasive and long-term detrimental to the health of each ecosystem than the crypto community recognizes. The vast majority of new tokens being created are layer-2 assets that live on top of smart contract platforms, and as such do not need to be mined in the same way that Bitcoin is mined. And most new blockchains are built using PoS consensus, and not PoW.

Moreover, the types of investors who’re investing in pre-launch tokens so that they can receive part of the genesis state have long holding periods and do not intend to sell their tokens upon network launch (and in many cases, early investors are locked up for years). In a PoS system, if early holders don’t sell, then wealth will remain extremely concentrated.

Given a scenario in which founders are vesting, early investors are locked up, and validators don’t incur significant fiat-denominated costs, how can teams building layer-2 tokens and PoS systems create the right conditions to foster more decentralized token ownership?

Entrepreneurs building these systems aren’t oblivious to this problem. In the last few years, teams have experimented with a few different methods to get their tokens in the hands of more people. However, these efforts have been, for the most part, wasteful.

Of course, the most well known distribution mechanism is the ICO. And while ICOs can help with the token distribution, they aren’t actually that effective. To the best of my knowledge, the ICO with the largest number of contributors was Tezos with about 30,000 participants. Ethereum had 6,000. 0x had 11,000. Moreover, these distributions were extremely concentrated. They didn’t do much to actually spread the wealth around because the rich got just got richer.

Since the ICO insanity of 2017, the volume of public ICOs has ground to a halt over regulatory concerns. Token teams have been trying to figure out ways to distribute their tokens to more people, but have struggled. And since the SEC announced that networks that become sufficiently decentralized can morph in status from (unregistered) security into pure utility, decentralizing token ownership has become even more important.

So what have token teams done to distribute token ownership?

Dozens of teams, starting with OmiseGo in late 2017, airdropped their tokens on thousands or even millions of users using extremely light criteria such as all wallets with > .1 ETH. The theory was that when users see a new token in their wallet, they’ll want to learn more about it, buy more, and maybe even use the service. This has overwhelmingly failed in practice. The most common outcome of massive airdrops has been that consumers sell the tokens because “free money!”

Similarly, Stellar tried giving away 1.5% of their token supply via a Facebook giveaway in 2015. It’s general consensus that insiders spammed the system and took most of the tokens for themselves. Then they tried again in 2017 with 16% of the token supply, albeit with some different mechanics. And now they’re trying again with about .5% of the token supply, this time by offering up $125M of XLM to 30 million blockchain.com users. Given the lack of positive response the first two times, we find it unlikely that this approach will result in anything more than people selling the token because “free money!”

Others like Quantstamp, Numerai, and Handshake tried a more targeted and centralized approach. Quantstamp used with a unique algorithm called proof of HODL to determine the best users. However, they have since deleted the original blog post, which tells you all you need to know about the success of their model. Interestingly, Numerai and Handshake, which used far more centralized and ultimately targeted approaches for their airdrops, were probably the most effective to date (both were basically permissioned airdrops).

While a handful of approaches have produced good results, none of them are fully generalizable, decentralized, permissionless, global, and censorship resistant.

Except one that’s gone largely under the radar.

Livepeer was announced in March of 2017. At the time, token teams were haphazardly airdropping tokens left and right and hosting insane ICOs. Doug and Eric, the cofounders of Livepeer, recognized that this was unlikely to produce an engaged, thriving community of users and transcoders.

Livepeer (LPT) is an open protocol that facilitates permissionless, decentralized video transcoding. The Livepeer network went live in May of 2018, and the team has continued to iterate since then. As part of the network launch, the Livepeer team devised a clever scheme called merkle mining that simulates PoW mining on top of the Ethereum blockchain. A complete description of merkle mining is available here. Here’s a brief summary:

As of some block height, the Livepeer team took a snapshot of the Ethereum chain. Every account with more than 0.1 ETH in it had the right to claim up to 2.44 LPT each. There was minimal cost associated with doing so; Ethereum account holders just had to submit a single transaction to the chain, and pay the required amount of gas. Account owners had 86 days to claim their LPT. After the end of 3 months, all unclaimed tokens were then pooled together and made available for anyone to merkle mine.

Merkle mining is similar to mining, but instead of running hashes to find a hash value that’s below some threshold, merkle mining requires merkle miners to generate merkle proofs demonstrating that a specific Ethereum address was in the set of accounts that had at least X ETH at some block height. The Livepeer team provided an open source library that made it easy for anyone to produce these proofs. The computations for each merkle proof are deterministic, can be computed ahead of time, and aren’t that computationally intensive (relative to PoW mining).

Merkle mining forces merkle miners to incur ETH-denominated costs because the merkle miners must pay for gas on the Ethereum network to store the proofs. Storage is by far the most expensive resource in Ethereum, such that merkle miners incur material costs in the form of ETH paid to Ethereum miners. 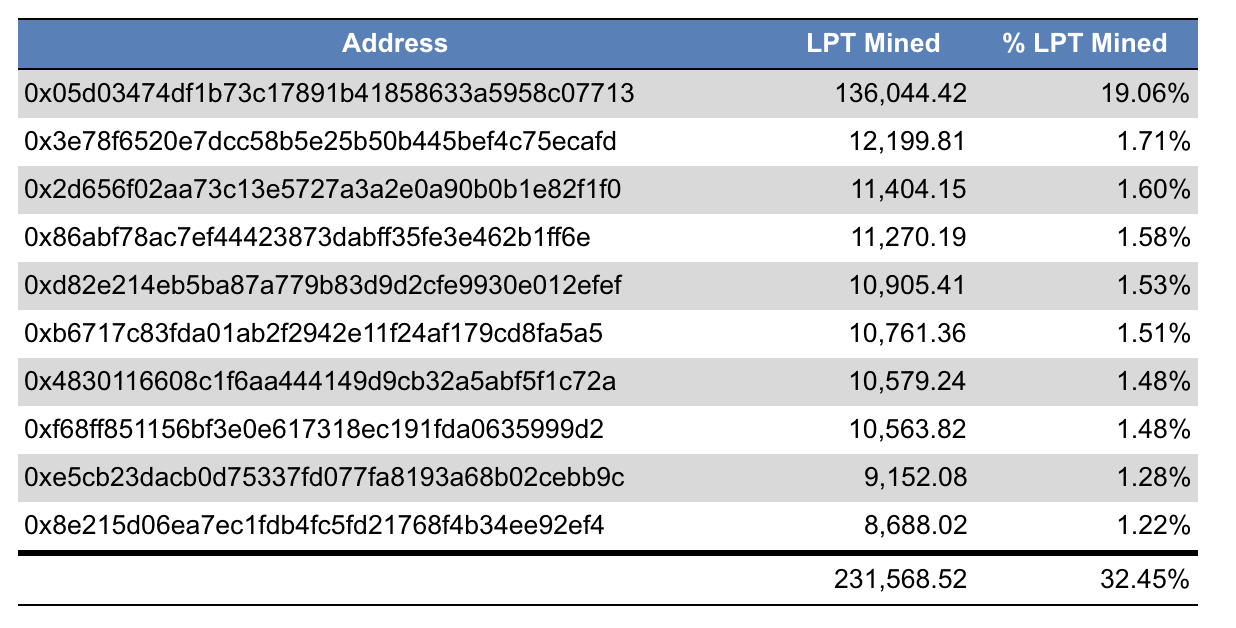 Although the token distribution didn’t end up as distributed as I would have liked, this can be at least partially explained by how under the radar it was. My hope is that as a result of publishing this post, more teams adopt similar mechanics and draw more merkle miners, which will help distribute tokens more widely in future iterations. It’s very easy for merkle miners to mine to many addresses, so it’s hard to know how many unique miners this represents. One miner could own addresses 2-10 listed above, or separate miners could own each address. Unfortunately, we have no way to tell.

I cannot overstate the benefits of this approach. It doesn’t have the regulatory risk of an ICO, was entirely permissionless, global, and can be executed on any computer (no special hardware or large capex required).

This is entirely unprecedented for layer-thn2 tokens. For the first time ever, people who cared about the Livepeer vision could mine LPT using free software provided by the Livepeer team, on commodity hardware at home, without revealing their identities to anyone or asking for permission. It truly fulfills the original ethos of Bitcoin’s POW mining – that anyone can mine at at home – to reality.

Who Should Adopt Merkle Mining?

LPT is a work token. This means LPT is not money used to pay for services in the Livepeer network. Rather, people who want to perform transcoding services for the Livepeer network stake LPT for the right to perform work for that network, and are paid in ETH. Given that the target LPT users are people who want to transcode videos, the merkle mine is the perfect way to encourage self-selection and get financial speculators out of the market.

Moving forward, I expect many teams building work tokens to adopt similar mechanics for part of their token distribution. Fundamentally, all work token holders can self-select into a merkle mine process.

The other category of target users are teams that are launching POS networks. Stakers are people who would naturally self-select into managing some hardware, so there’s a strong overlap.

During the last few weeks of the Livepeer merkle mine, merkle miners were consuming upwards of 30% of all gas on the Ethereum network. Many people complained because gas prices increased across the network. While this is a drawback, we consider it a small one. The Ethereum network is a permissionless, censorship-resistant world computer that relies on free-market economics. Arguing against this is akin to arguing for censorship, and violates the ethos of Ethereum. Also, arguing against this is an argument against using Ethereum.

We encourage every team that’s building a layer-2 token or a PoS blockchain to consider some permissionless way for passionate community members to participate that’s not an ICO. This merkle mine is beautiful in its simplicity and elegance. It’s truly permissionless not only in theory, but also in practice, unlike PoW mining, which requires custom hardware.

To the best of our knowledge, the Livepeer team was the first team to do something like this. We’re looking forward to seeing other teams use the system as well, and to iterate on the mechanics that the Livepeer team pioneered.

If you’re considering adopting the merkle mine or have ideas on how to improve upon it, please reach out! We’d love to hear from you, and learn what variables you’re thinking about with regards to token distribution. Token distribution is of paramount importance, and we’d like to see everyone in the crypto ecosystem adopt best practices.

Thanks to Doug Petkanics for providing feedback on this post, and special thanks to the entire Livepeer team for figuring this out.

Disclosure: Multicoin Capital was an early LPT investor, participated in the merkle mine, and owns LPT tokens.